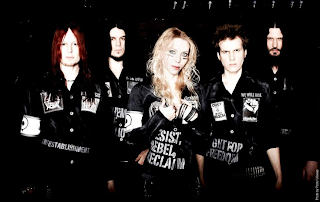 Arch Enemy are a frequent guest of  'Let there be Rock'. On several occasions we interviewed all bandmembers on all kinds of subjects. Here's the list of interviews from newest to oldest.


April 2011: at the Musikmesse in Frankfurt I met up with frontwoman Angela Gossow to hear all the details of the new Arch Enemy album 'Khaos Legions' which (at that moment) is about to be released in 6 weeks. Listen to the interview here.

November 2010: Moments before they hit the stage at the Academy Club in Manchester (GB), I had a chat with drummer Daniel Erlandsson. Arch Enemy were doing their final shows of a 3-year touring period and were just about to enter the studio to record 'Khaos Legions'. Listen to the interview here.

October 2010: Just before Arch Enemy played at 'Waerdse Tempel' in Heerhugowaard (NL), I had a cool talk with bassplayer Sharlee d'Angelo (far right on bandphoto). We also discussed Spiritual Beggars; he is a cool guy and a real powerhouse on stage. Listen to the interview here 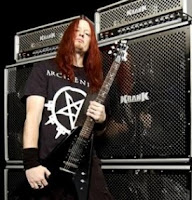 October 2010: Just before Arch Enemy played at 'Waerdse Tempel' in Heerhugowaard (NL), I met up with guitarhero Michael Amott. Main subject of the interview was Michael's other band Spiritual Beggars who had just released a new album called 'Return to Zero'. Listen to the interview here.

April 2010: Hours before the Arch Enemy show at Paaspop Festival in Schijndel (NL) I talked to Angela Gossow at the Holiday Inn Hotel in Eindhoven about all the Arch Enemy plans for 2010 working towards a new album. Listen to the interview here.

December 2009: Moments before Arch Enemy went on stage of the 'Lucky' in Rijssen (NL) I met up with guitarist Christopher Amott. Besides being a fantastic player Chris is a real nice personality. Arch Enemy was in the middle of touring to promote 'The Root of all Evil' and Chris was re-releasing some of his old Armageddon solot stuff. We also found out Chris' plans for a solo record. Listen to the interview here.
Gepost door Ron Coolen op 13:41

Ron Coolen
'Let there be Rock' is an online channel specialized in interviews with heavy metal bands and musicians. No 'what's your favorite band' small talk, but we take the time for in-depth talk giving musicians qualitative airtime. Owner Ron Coolen runs this channel and he is known for his Charity work for Jason Becker, for whom he ran the 2008 New York Marathon in order to raise funds for Jason.